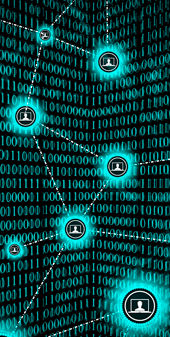 The blockchain is the underlying technology behind bitcoin, the cryptocurrency everyone is talking about right now. However, contrary to bitcoin and all the controversy surrounding it, the blockchain is a technological innovation per se that has proven its reliability. It is quite ironic that bitcoin can be used to pay for all sorts of illicit or illegal trade activities but thanks to the blockchain it is not possible to carry out these transactions with fake bitcoins. Furthermore, and most importantly, blockchain technology can be used for a wide variety of applications other than creating a cryptocurrency.

What is the blockchain?

A blockchain is basically a shared public ledger that keeps a record of all transactions between participants or network nodes, or to be more exact blocks of transactions that make up the chain:

This leads to a number of questions that we are going to try and answer in the rest of this article:

Last but not least, what can it be used for? Let us first provide a brief answer to this key question.

What are the possible uses of a blockchain?

In order to understand the possible uses of the blockchain, we need to start with the notion of the transaction. A transaction or a transfer is an exchange that occurs between two parties requiring the presence of a trusted third party who can attest to the validity of the transfer, i.e. between two parties who basically have no reason to trust each other mainly because they do not know each other.

The transfer is used to broadly refer to a pre-existing asset or right that is transferred from one party to another, or to the creation of an asset or right of which the transfer consists in certifying that the person is the only initial holder:

In all the above examples, the validity of the right is endorsed by a trusted third party: bank, central securities depository (csd), registrar, registry office, trading marketplace, lawyer, copyright organization, municipality etc. that keeps an up-to-date registry of ownership rights.

The blockchain cancels the need for a third party presence, while maintaining the essence of the function, i.e. trust. It allows for ledger sharing or distribution among all parties in a decentralized manner that guarantees the authenticity of the information it conveys.

How does the blockchain work?

As with all information systems, the block chain infrastructure is based on an information storage system (database) and a software data processing layer:

How are these transactions validated?

Transactions are validated by means of the double public/private key underlying cryptography. Each participant of the blockchain owns a public key that is a unique identifier shared in the blockchain but also owns a unique private key that he alone disposes of. In order to sign a transaction, the participant, for example Dorothy, enters the text information that requires signing as well as her own private key in the "Sign" function which in turn sends back a "Signature", which is a unique byte stream:

Please note that this system also respects the confidentiality of the participants. The public key is simply allocated in a unique manner by the system but does not reveal the identity of its owner

How is a transaction validated?

As we have just seen carrying out a transaction is extremely simple, all you need to do is enter the text of the transaction, generate the signature by means of a private key and post it all on the network: all the nodes are immediately informed that "Dorothy sold her bike to Jane on 02/02/16". Everyone can verify that Dorothy’s signature is authentic by means of her public key. So if Jane then wants to transfer her bike to Mary, the participants will accept the transaction.

Yes but... what stops Dorothy from posting a message the same day that she has also sold a bike to Laura? Or if it concerns bitcoins what can stop her from double spending the same quantity of bitcoins?

To prevent this, the order in which the transactions are entered in the blockchain must be immutable so that they can be verified any time by checking the records that Dorothy does indeed hold the quantity sold – which in this case would mean that she would have to own TWO bikes (or bitcoins, or shares of a particular company etc.) – at the moment of the transfer.

How is consensus reached? Method 1: Proof of Work

As and when transactions are created, they collect in a new block while waiting for validation. Special network nodes known as miners are in charge of validating transactions. As we noticed it is relatively simple to carry out. But then again it remains to be proven that the work has been carried out correctly and in an honest way! In order to do so the miners will be:

The competitive procedure consists of work carried out by the miners to solve a complex mathematical problem. In practice, it involves the use of a cryptographic 256-bit hash function called the SHA-256 to generate a byte stream that will make up the next block’s identifier, which contains the hash of the preceding block and a test number. It also requires that the resulting chain commence by a pre-determined number of zeros

The SHA-256 function behaves in a totally unpredictable manner and it is impossible to turn a hash back into its original string. Miners have no choice but to generate random numbers continuously, until they find a winning one that satisfies the arbitrary condition.

The first one to successfully create a hash can validate the block, post the new identifier or "proof of work" on the network and earn a reward…bitcoins! This is the system’s incentive and that is how bitcoins are created

Establishing consensus requires an enormous amount of computing power. Consensus can be trusted as long as:

What happens if two blocks are validated at the same time?

If this happens, there will be a fork in the chain, meaning the two blocks that have been created carry the reference of the previous block, which is undesirable as two versions of the same story are being written. In this case an essential operating rule will be applied: if at a given moment two chains appear, accept the longest available chain to validate the block. At worst, during a brief moment the miners will work at the same time on the two versions but very rapidly one of the chains will become longer than the other. The shorter chain will be ignored and the remaining transactions it contains will have to be validated once again.

This means as time goes by, more and more blocks will be added to the blockchain and it will become more and more difficult to reverse a valid transaction, as the computing power needed to do so would be insurmountable.

As stated in the original paper by the legendary Satoshi Nakamoto: "The system is secure as long as honest nodes collectively control more CPU proof-of-worker than any cooperating group of attacker nodes".

Theoretically it is interesting to note that the blockchain "solves" the well known "Byzantine General’s problem" (please refer to the bibliography where you can find further information on the theoretical aspects) but this solution is not really one as it is a "practical" solution and we are still left with the theoretical problem!

In its original version Nakamoto’s consensus protocol is extremely robust but has major disadvantages:

This is why another consensus protocol is being developed. One that is not based on "proof of work" but rather on "proof of stake". Basically this time a large number of users is not required to validate a block, a single network node is sufficient (but everyone can still control the validity of the work). Instead of earning a small amount for a valid result, a block generator stands to lose a lot if he posts an invalid result! He must prove that he owns a sufficient proportion of assets (money, securities, rights) managed by the blockchain.

The major advantage of this method is that it is a lot more efficient in saving both time and energy when processing transactions. However it does present some weaknesses especially concerning the level of security. But, it all depends on how the blockchain is used. A "private" blockchain that functions with a limited number of participants who more or less know each other "in real life" (for example banks) could in fact benefit from this method.

An interesting option: the "smart contracts"

Up until now we assumed that the blockchain was the platform behind a succession of relatively simple transactions such as "at a given moment A transferred to B an x quantity of a certain asset). A promising blockchain application could store "smart contracts", i.e. protocols that are capable of triggering actions based on their current state and a triggering event.

An example from everyday life could be: "if the lender is late in paying his car installments, hand the ignition key over to the bank…" In finance it could be "if the swap’s intermediate due date is reached, trigger the interest payments and calculate the new rate "…

We concentrated quite a lot on the multitude of possible blockchain applications in the preceding chapters. In the near future you can expect to see more and more articles on the subject, even in mainstream publications. This is already the case in the English press.

However, considering that this is a website dedicated to finance we need to go into more detail concerning the possible applications in this field.

A system that could be trusted by all concerned to manage transactions seamlessly and securely would obviously not go unnoticed among the financial actors for very long and that is exactly what is happening right now. There is a proliferation of projects involving mostly "proof of concept" testing of the blockchain and distributed ledgers. Not one day goes by without some press release mentioning the subject. Here is a brief overview of the various areas of application:

Originally bitcoin and its blockchain technology was an eminently ideological venture. Its underlying ideology is that of American libertarians who campaign for the demise of the state. The blockchain was created so that bitcoin could function (and in fact functions) for users in a satisfying way that bypasses state control, central banks and …merchant banks!

The role of a "trusted third party" is at the core of the banking business, not only as far as monetary exchange is concerned but also for all types of financial contracts, securities, debts, derivatives etc.

It therefore follows that bank strategies can be understandably defensive and they will opt to ride the waves of change to avoid being engulfed by them. It’s a safe bet to say that the most interesting initiatives will not be coming from the banks themselves or the post-trade infrastructures such as clearing houses etc. because that would mean cutting off the branch they are sitting on, but instead from new market players.

And that’s where key players like regulators, who are following these technological developments with great interest, come in. Of course they could nip progress in the bud if they felt it was contrary to financial security and stability but on the other hand they may provide strong encouragement to fuel their cause. (See what we mentioned previously concerning OTC derivatives).

It is also advisable to take into account acceptability of this type of solution by the users, individuals or companies for the banks, capital market investors. Who should we trust the most:

I leave it up to you to answer this intriguing philosophical question.

A word of advice: use Google alert to keep track of new publications concerning the subject…and plan to spend some all-nighters reading them all!

With reference to finance