Measuring the carbon footprint of an investment portfolio

Why measure the carbon footprint of portfolios?

There is no longer any doubt for investors today that climate risk is an integral part of economic activity. As such, investors must take this risk into account in the management of their portfolios, otherwise their assets will depreciate under the impact of climate change.

Climate risk can be approached in two ways:

Calculating the carbon footprint of portfolios is not a response to physical risk. On the other hand, it helps address the transition risk. Indeed, the companies with the highest emissions risk seeing their business model questioned in the context of the transition to a low-carbon economy, and their assets (fossil fuel deposits, industrial infrastructure, for example) depreciated to the point of becoming "stranded assets".

The carbon footprint is a measure of the greenhouse gas emissions generated by the companies held in the portfolio. Emissions are understood in the generic sense, all greenhouse gases (carbon dioxide, but also methane, nitrous oxide, CFCs, etc.) taken together and are therefore measured in "Tons of CO2 equivalent", TeqCO2.

Of course, to be meaningful, the figure must be related to the amounts invested and the activity of the companies financed. This is what we will see further on, but first of all we need to look at the data necessary for this type of calculation.

Source of the data

Before embarking on any type of calculation, it is important to have reliable quantified data, under penalty of producing irrelevant indicators, however sophisticated they may be.

Until now, investors have been used to collecting figures on companies such as balance sheets, results, market value of financial securities, etc. But the collection of GHG (greenhouse gas) emissions produced by a company is a relatively new subject. Methodologies exist, but the data itself is still not widely available.

In principle, GHG emissions are measured at the level of several scopes : 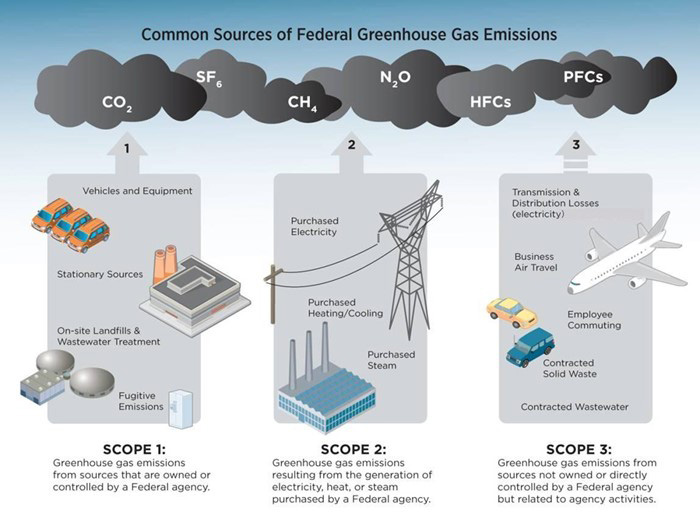 GHG emissions of the U.S. Environmental Protection Agency in scopes 1, 2 and 3 (source)

Ideally, data should be available for scopes 1, 2 and 3 of all companies financed. However, this is rarely the case for several reasons:

The data may come from the following sources:

Whatever the source of the data, there are many uncertainties and inconsistencies, due to incomplete perimeters, changes in methodology from one year to the next, and so on. In particular, the calculation or estimation of Scope 3 emissions still involves many methodological problems.

Clearly, the field of extra-financial data is still emerging and there is much room for improvement. The coming European regulations will hopefully push companies to improve their reporting, otherwise investors risk turning away.

To be relevant, a carbon footprint calculation must be readable and relatively easy to calculate. It can be adapted to an asset class (e.g. equities), or more generic (equities and bonds). Above all, it must enable the portfolio to be compared with other portfolios or with a benchmark, or to follow the evolution of the portfolio over time. For this purpose, it is preferable that the indicator is not sensitive to the size of the portfolio or to the volatility of stock prices.

The financed emissions represent the portfolio's carbon footprint per million euros invested, therefore in tonnes of CO2 per €M invested. This indicator allows comparisons to be made, ignoring the portfolio size effect.

This calculation method is suitable to equity portfolios. For a bond or diversified portfolio, the market capitalisation can be replaced by the valuation of the company calculated from balance sheet data, for example net assets :

As before, in this type of formula, the market capitalisation can be replaced by the company's valuation:

This indicator is dependent on the size of the companies financed.

Carbon intensity measures the portfolio's exposure to regulatory risk such as a carbon tax. It does not take into account market capitalisation and is therefore not impacted by price volatility.

Carbon intensity, whether total or weighted, does not take into account a company's positioning. For equal emissions, a company with a high-end positioning, and therefore a high margin, will have a lower carbon intensity than a company with a lower margin. To ignore this bias, it would be necessary to perform an analysis at the production level. For example, for a car manufacturer, relate CO2 emissions to the number of units produced.

The indicators described above are well suited to portfolios of listed securities of private companies. In particular, the use of company value in the denominator, instead of market capitalisation, makes it possible to calculate an overall carbon footprint for a diversified portfolio containing equities and bonds.

However, there are many types of investment portfolios, just as important for the economy, for which these indicators are not relevant.

In the case of sovereign bonds, a method is needed to estimate the State's overall carbon footprint. Should only the public sector be taken into account, or the whole economy? In the latter case, however, there is a risk of double counting if the portfolio also contains bonds of large private companies.

Another approach consists in not directly calculating a carbon footprint, a risky exercise anyway, but rather to follow a risk-based approach. State policies to reduce their carbon footprint can be assessed, for example through Intended Nationally Determined Contributions (INDCs).

In the case of unlisted companies, extra-financial reporting is generally absent. It is only through direct contact and dialogue that the investor can convince the company to calculate and track its carbon footprint. This is part of the so-called "engagement policy", which is very much in favour among SRI investors.

Here again, a figure can only be obtained prospectively and based on modelling, since, by definition, the asset financed is not yet in operation. Methodologies are proposed by specialist firms such as Carbone 4.

It is relatively easy to calculate the carbon footprint of a property asset in CO2 equivalent per m², based on the technical characteristics of the building. However, the portfolio's investment strategy must be taken into account. If this strategy consists of buying buildings to renovate them before reselling them, the portfolio's carbon footprint may be poor overall, although the end environmental impact is actually positive.

The carbon footprint is a good tool for monitoring a portfolio globally over time, and at the level of each company to engage in a dialogue and measure its emission reduction policy.

However, there is a huge quantitative bias that institutional investors are very conscious of: a portfolio of low-emitting tertiary sector stocks will necessarily have a much better carbon footprint than a portfolio of industrial stocks. However, it is the latter that hold the most promising solutions for decarbonising the economy.

As part of a genuine policy to support the economy in the energy transition, other types of indicators must therefore be taken into account. These include the following:

Furthermore, the comparison between portfolios, particularly those of different asset management companies, is made very difficult by the differences in methodology.

In conclusion, the carbon footprint, like all numerical indicators, is a useful tool in which one should not be locked in, however, as it can be falsely reassuring.