The share is certainly the financial instrument most familiar to the general public, as the impact of variations in its value is so perceptible on our economy. Its reputation makes it a product that is essential to know about since it is at the heart of financial engineering.

Whether it is a title of ownership of a company for shareholder-partners, or a source of income, an object of speculation and desire for investors, or all of these at the same time, shares are of interest to everyone because they are so universal. However, one important point should be made: share does not always rhyme with stock market. Although it symbolizes in the general opinion the first reference to market finance, it concerns companies listed on the stock exchange and those that are not. 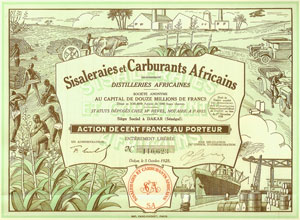 At a time when shares were printed on paper...

A share represents a fraction of the capital of a company and more specifically of a corporation. Thus the capital of a company is composed of several shares that represent the rights of each shareholder in the company. The quantity and quality of the shares held in a company determine, among other things, voting rights at meetings (and therefore participation in strategic decisions) or the allocation of advantageous financial income (e.g. bonus dividend).

A share is first and foremost a financial instrument. This classification, as its name suggests, includes securities that confer financial rights on their owners. In other words, the share allows them to draw capital from it. Any comparison between financial instruments is then mainly based on the criterion of remuneration but also on the criterion of risk. It can be said that the investment of a share is more profitable than that of a bond, but also that it is riskier.

While shares were originally part of company law as a technique for organising a company, they now appear more as a means of financing companies.

Shares are part of the generic class of transferable securities in the same way as bonds or certificates.

"Transferable securities are securities issued by public or private legal entities, transferable by book-entry or traditional means, which confer identical rights per category and give access, directly or indirectly, to a share of the capital of the issuing legal entity or to a general claim on its assets.

Securities comply with common rules concerning their conditions of issue, their registration in an account and the identification of their holders. Securities are said to be fungible, i.e. within the same issue, the securities are interchangeable.

Although they have similarities, tradable shares should not be confused with ownership shares.

The main difference is related to their mode of transmission, which is simplified for shares because of the imperatives of speed of business. Thus, the capital of a private limited liability company is composed of ownership shares and not tradable shares, the same applies to mutual funds.

In France for example, the law attributes the status of tradable shares to the securities that make up the capital of:

Basically, several people together create a business in the form of a corporation. They jointly invest money in the company and allocate it to a specific goal: the corporate purpose. This corporate purpose corresponds to the actual activity that the company will carry out: manufacture of children's clothing, construction of buildings, production and marketing of dairy products, business advice, banking (banks are companies), etc. The share materialises the financial contribution made by the partners in a common project. Its value is expressed by the nominal amount of the share.

Thus each shareholder is the owner of a part of the company's capital. In return for his financial contribution he receives a certain quantity of shares, often determined as a percentage. The number of shares held gives him rights relating to the company and in particular his rights to profits.

The share is a fraction of a company's capital. It is thus a simplified mode of business ownership that allows a multiplicity of stakeholders, all owning their fractions, and whose objectives may be diverse: as investors, speculators, annuitants, small shareholders or decision-makers for example.

One shareholder has contributed €55,000; he is therefore the owner of 55% of the capital and will receive in principle 55% of the distributed profits and 55% of the voting rights unless otherwise stipulated in the articles of association. 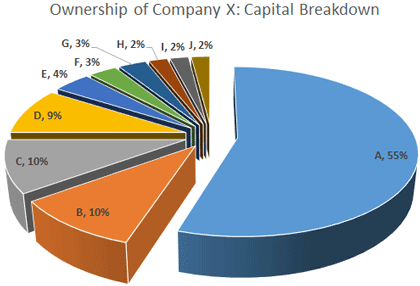 Since 2004 there are only two types of shares in a country such as France:

The purpose of preference shares is to grant their holders preferential rights of any kind over holders of ordinary shares. This may be in the form of a higher dividend, or double voting rights, no voting rights, priority payment of dividends, etc.

At the same time, there are so-called compound or hybrid securities. We can mention the following:

Today shares are dematerialised, the paper security has in a way disappeared. The shares are now registered in an account with the issuer or an authorised body.

In the past, the bearer share was a paper security that gave the right of ownership of the share and the rights attached to it to its holder.

Nowadays, shares are called registered shares when the issuing company knows the name of the person who owns the shares. The shares are called bearer shares in the opposite case. Book entries are managed by an authorized external organization.

Support for holding shares (or securities)

The stock savings plan is a securities account that offers preferential tax treatment depending on the duration of ownership, possibly with some restrictions (for example, the French ones can only receive shares or equity funds from the European Union) .

An "indirect" way of holding shares and diluting risk is to invest in one or more mutual funds, by buying shares or units in these funds.

Indeed, funds are entities whose purpose is to invest in financial instruments. Schematically the investor who buys shares or units of funds (at net asset value) therefore holds shares of shares: he is the owner of the fund shares, an entity which in turn holds shares. This leads to a dilution of market risk by diversifying the portfolio constituted by the fund.

Life insurance is a savings product that allows you to invest in funds and shares. The sums invested in life insurance are treated globally. They benefit from tax advantages and make it easy to pass on wealth.

The holding of even a single share in a company gives the shareholder rights within the company.

Shareholders are entitled to:

They also have a preferential subscription right in the event of a capital increase.

As a matter of principle, the shareholder's share in the profits is proportional to the percentage of share capital being held. Thus a shareholder who holds 40% of the capital will receive 40% of the distributed profits.

Shares are extremely easy to sell once a buying counterparty is found. The sale of shares in listed companies will of course be easier to achieve since the existence of a financial market ensures the liquidity of the securities. As with other financial instruments, listed shares are identified by an ISIN code.

Unlisted shares can be sold by a registration made in an account held directly with the issuer or an authorised intermediary (registered share). For listed shares, a sell order must be placed on the relevant market and as soon as an order in the opposite direction is received, the sale is carried out. The sale is then materialised by transfer from one account to another.

Dividends are income from the shares making up the capital of legal entities such as joint stock companies. The dividend is distributed to shareholders by decision of the general meeting. It is paid once a year or in three installments.

For a dividend to be paid, it is necessary that profits have been made and that a decision to distribute these profits has been taken. Its payment is therefore not compulsory and is not automatic for each financial year. The payment of a dividend to shareholders when the company has not made a profit constitutes an offense (e.g. of unlawful dividend in the UK, of distributing fictitious dividends in France).

As an example, in 2009 Renault decided not to pay dividends for 2008 despite the presence of profits (down 7%).

As another example, French bank Société Générale paid a dividend of €2.20 per share for the 2018 financial year with an option to be paid in shares (source).

The existence of preference shares confers advantages on shareholders that are not available to holders of ordinary shares, including the right to a dividend that may be higher or paid in priority. However, a company's capital cannot be exclusively composed of preference shares.

So, schematically, a share whose stock market price is 100 at purchase and resold 110, makes the shareholder realize a capital gain of 10.

The advantage of investing in shares is that the shareholder can only lose at most the amount he invested, i.e. the total nominal value of his shares. It is said that his liability is limited to his contribution. He is therefore not liable for the debts of the company, the amount of which would be greater than his investment.

As for the expected gains, these can exceed the amount invested without limits.