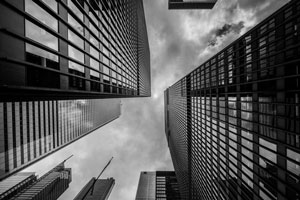 Shadow banking refers to non-bank financial intermediation activities taking place outside the regulated banking system.
The term shadow banking emerged during the financial crisis of 2007-2009. The origins of the downward spiral in which the markets and banks found themselves in, stemmed from securitisation activities and was fuelled by, among other things, money market funds, two of the activities linked to shadow banking.

In order to better understand shadow banking, one needs to first of all explain what banks do. Banks carry out financial intermediation: they transform their financial sources (liabilities) into assets, mainly through loans with different characteristics. This transformation may include several criteria:

These characteristics, which are very specific to the banking business, may expose the bank to the risk of a bank run. If all the depositors arrive at the same time to make withdrawals of the assets in their accounts, a commercial bank can find itself insolvent from one day to the next.  An investment bank can also find itself in great difficulties if it cannot obtain interbank refinancing. This was the case for Lehman Brothers ' failure.

Because of its key role in financing the economy and the fact that it draws on public savings to finance itself, the banking business is highly regulated and benefits, in exchange, from certain guarantees.

These elements will help us to further clarify the definition of « shadow banking ».

Shadow banking covers all financial intermediary activities (credit risk transfer, maturity transformation and or liquidity and leverage) operating outside the regulatory framework of banking activities and therefore not subject to the constraints and also not covered by the guarantees offered to the banks, but exposed to a major liquidity risk.

A certain number of activities are clearly within the « shadow banking » scope of designation.

The securitisation SPV (Special Purpose Vehicle) finances illiquid assets and debts with liquid liabilities and securities (CDO, MBS, RMBS) sold to institutional investors. If the default rate on securitised debt exceeds the threshold laid down, the SPV will not be able to meet its payment obligations for securities that have been issued, thereby penalising investors’ profitability.

Hedge funds employ complex strategies that are difficult to unwind rapidly. Their success depends on their funding (financial) stability but also on a certain lack of transparency. In the case of loss of confidence, they have to rapidly meet massive demands of reimbursement by their investors. Plus, hedge funds use leverage extensively, which enables them to increase profitability of return on capital invested when the markets are rising but also exposes them to large risks in the case of falling prices.

The case of repos and securities lending is somewhat unusual as it concerns unregulated activities that are carried out by regulated or unregulated entities and not any entity in particular. This over-the-counter market (off-exchange trading only) is based on the value of assets used as collateral for the operations. If there is a loss of confidence for these assets considered as toxic, as was the case during the subprime crisis, the repo market is immediately blocked. And therein lies the problem, as it is precisely via the repos that banks can obtain refinancing from the interbank market.

This is yet another unregulated, off-exchange trading activity that is carried out by regulated entities. The CDS market in particular was at the heart of the financial crisis. This market creates a sequence of credit risk transfers that can be potentially explosive in the case where a default occurs along the chain. The the listed or OTC derivatives derive their value from the underlying assets but the market far exceeds the size of the actual (real) assets. It’s a market where leverage comes into full play and as always in both directions. However, this market is being pushed out of shadow banking and into the spotlight by the Dodd Franck and EMIR regulations (see below)

Money market funds invest in reputable securities such as Government securities and guarantee holders a 100% reimbursement of the amount invested. Investors can « park » their cash while waiting for a better opportunity. It pays low returns but there is no risk of loss in value. However, once again this commitment can only hold as long as investors have confidence in the quality of the assets held by the funds. So, if the fund has to meet massive payoff requests on its liabilities and if at the same time there is a fall in the value of its assets, it will find itself in trouble rapidly.

The list of the type of activities that fall under shadow banking should certainly not be regarded as restrictive. On the contrary the FSB (Financial Stability Board) wishes to carry out ongoing monitoring of any type of activity that is similar to a banking activity but is carried out by non or barely regulated entities or within an unregulated framework. This is how commodity brokers appeared on the FSB radar a while ago.

Entities and activities that are not exposed to the risk of massive withdrawal (bank run) on their liabilities are not part of the shadow banking system. These are pension funds, insurance companies and most of the investment funds.

Literature acknowledges some theoretical advantages regarding the existence of shadow banking. It offers intermediation means that are inaccessible to banks or counterparties that do not have access to bank financing. It makes it possible to disperse risk instead of it being concentrated entirely on banks.

The risks are as real and described in a better way.

If these activities were run in parallel to traditional financing, i.e. with no link between them, there wouldn’t really be a problem. This is obviously not the case and anyway we can’t really see how it could be possible or even desirable. Banks, institutional investors and  « shadow banking » make up a network of relationships and dependencies that are sometimes difficult to assess. Shadow banking activities are either directly carried out by banks (repos, OTC derivatives), or indirectly via subsidiaries (money market funds) or financed by banks (hedge funds) or on the contrary they finance them in turn (securitisation).  As for institutional investors they contribute to the financing of shadow banking by purchasing assets it issues (securitisation) or through lending (repos, securities lending), or even by being themselves a part of shadow banking (hedge funds).

Also, due to shadow banking’s extensive use of leverage it plays a pro-cyclical role, which tends to accelerate the granting of credit and price increases in periods of expansion and to generate downward spirals during economic contraction.

Finally, as shadow banking concerns poorly regulated entities or activities it is very difficult for the regulator to grasp its volume, the strategies it uses and the dependencies it creates. It’s a market that lacks transparency but that is nevertheless legal.

The interdependence, opacity, pro-cyclical effects together with the bank run risks that can rapidly contaminate the whole of an activity (securitisation, CDS, money market funds, the interbank market…) indicate that shadow banking could be the next spark that sets off the fire. In short, shadow banking is an important source of systemic risk.

The size of the shadow banking system

So what does the regulator do? In fact he is not inactive. Even though regulatory changes take a while to be defined and applied, the time of benign neglect is over.  One of the G20 objectives that the FSB and the Basel Committee have been entrusted with is to increase transparency and regulation in shadow banking. There is more information about the proposed reforms in the FSB documents that can be found via the hyperlink at the end of this article.

OTC derivatives will have to progressively move towards more transparency and security via reforms like the Dodd-Franks in the USA and EMIR in Europe.

Hedge funds are increasingly regulated in Europe since the implementation of the AIFM directive.

The Basel Committee has defined an additional capital asset requirement concerning banks’ exposure to non-regulated entities (i.e. shadow banking) and aimed at preventing systemic risk. On this subject, it should be noted that although the crisis well and truly stemmed from shadow banking, the first reforms and the ones with the most constraints were aimed at…the banks!

Naturally, all these prudential regulations are recommendations that have been defined internationally so they have to be transposed into each country’s or economic zone law before being effectively implemented. This implementation must go through the Basel Committee and the banking regulation authorities (EBA, central banks in Europe) as far as banking regulations go (capital requirements in particular) and through the IOSCO and then the markets authority (ESMA in Europe) as far as market activities are concerned: regulation on securitisation, repos and money market funds.

Conversely, certain interventions by the regulator like the separation of banking activities into classic commercial banks and proprietary trading activities could have the contrary effect of moving activities that were in fact previously kept under the eye of the regulator, as they were present in the bank’s balance sheets, into the non-regulated sector.

In a broader sense, the FSB does not intend being surpassed by the events as it exercises monitoring on a constant basis via the national and transnational regulation authorities, not only to evaluate known shadow banking activities but also to detect new potential sources of systemic risk.

Of course one could question the degree of efficiency of these measures, which are proposed by the authorities and by definition always a trifle late. Also, implementation of these measures comes up against powerful lobbies that do all they can to strip them of their substance. Nevertheless to endorse what one can often read or hear about “governments that don’t do anything” is rather simplistic. The fact that these actions are not sufficiently clear to the public is without doubt partly due to the fact that it is not the governments who are in the front line but supranational bodies like the Basel Committee, ESMA… or national bodies like AMF and ACP, which are non-elected and playing little-known roles.

To find out more

Have a look at the FSB documents on shadow banking via this hyperlink: http://www.financialstabilityboard.org/list/fsb_publications/tid_150/index.htm

Also, an article on the BCE website "Enhancing the monitoring of shadow banking"

For an informative presentation, this speech by Timothy Lane, Deputy Governor of the Bank of Canada:  "Shedding light on shadow banking".